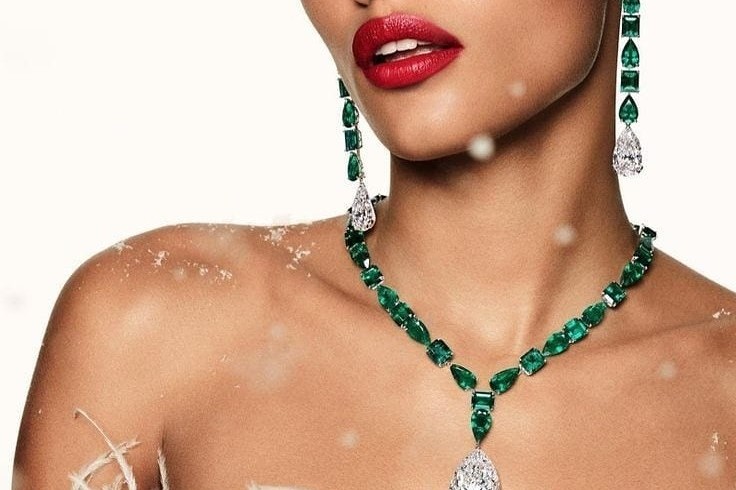 Superlative gem emerald from Beryl family signify new spring growth and is one amongst the 4 rare gems ruby diamond sapphire and itself. The crystal green mesmerizing sparkling color of emerald and its shine is breathtaking and has excited royal thrones, royal ladies since ages. There are other green gems also like tourmaline or peridot but emerald being the lushest and richest from historic times. The word emerald originated from Greek word "smaragdus" which stands for green. Clean and clear emeralds in vivid colors are one of the most expensive and sought after gemstones.

The oldest emerald mines known were in Egypt, which were more than 300 years BC. Emerald have since been used by Royals in the crown and thrones to exquisite royal jewelries throughout the globe, emerald green is considered as the coolest color to look upon which relaxes the eyes and even therapeutic use for this has been practiced for the treatment of cholera. The Incas have been using emeralds from ages in their religious performing other than jewelry. In Europe also emerald have been traded for precious metals where gold and silver importance was far more than gem stones.

Emerald was considered to give special powers to rulers and kings as sharp memory and and physical strength also when emerald was placed under the tongue was believed to make the future visible also as it signifies truth for taking oath it was held in hand. Emeralds are worn for protection from evil eyes.

The Indian royals had the fascination for this rare beautiful green gem from hundreds of years the best high quality far size pieces were used in ornaments of kings and queens as were the treasures and symbol of wealth and same with Mughals emerald has been the most desirable gem adorning the crowns and there are endless mythological stories about emeralds and it has a significant space in history when comes to treasures, gems and jewelry, art and ornaments. Still rulers of world have a special place for diamonds and emeralds as a symbol of richness, beauty and power.

Emeralds in astrology: Apart from it astrological values of emeralds are also there, its the birth stone for  the month of May and planet Mercury. The gem is significator of wealth, business growth, love and health as it dipicts the color of mother nature within. The gemstone worn for this purpose should free from treatments of rasin filling or heating just oiling is ok, as otherwise molecular structure of the stone gets changed and it no more has the significance for astrology as stones in astrology works by adding a deficient human body substance externally.

Someone's value is determined by the trust other people hold in him/her, We here at Jewel Fields believe that the amount of trust people have in us should be more than what they have in themselves.